Everyone I know seems to have a box of zombies at the back of their cupboard. Often there is no memory of how they even got there. This seems appropriate for zombies. These ones lurked unloved and unpainted for far too long, but have now crawled out of their toxic barrels, ready to shamble into whatever undead filled horror is required. (Most likely as totencorps for K-47.) 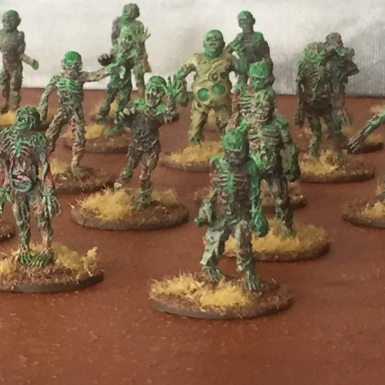 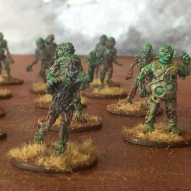 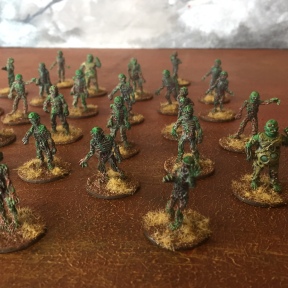 I had a play with a newish Citadel paint, Hexwraith Flame. Put it on a light base with a pale grey highlight and it can really glow. It behaves a bit like an ink, so my experiment of using red ink on the same models wasn’t entirely successful, loosing the bright finish. The end result is OK, but didn’t need expensive green paint to achieve. I’m looking at this as a bonus. The models are painted and I’ve learnt a bit about a new paint line from GW.

The models are Eureka Miniatures, and are their usual excellent standard with lots of different poses, which is a real plus for metal figures. From the same manufacturer are these toxic-waste zombies, emerging from mysterious barrels of goo. Good fun. 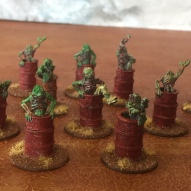 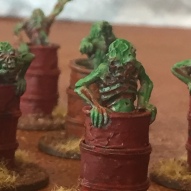 See you in the wastelands

The safe route for Warlord Games would have been to release a weird war source book for Bolt Action. Add some rules for flying infantry, some new units and weapons, and a few scenarios, and they could have had a viable and fun vehicle for their diesel punk alternative history and the associated miniatures. Instead Warlord, in a joint venture with Clockwork Goblin,  did something much more brave: they created a whole new game, Konflikt ’47.

Yep, these are GW zombies. But they’re in a truck, which tots makes them totenkorps

Anyone familiar with Bolt Action or its stablemate Beyond the Gates of Antares will recognise the core mechanics of order dice and random turns. But Konflikt ’47 has some distinct mechanics that really help bring this kooky new world to the table in a fun, balanced way.

It is a very clever and rather fun addition to the range. The two largest rules changes are to the assault rules and adding reaction orders. Close combat is still brutal, but the addition of a shooting round as units close to assault means that specialist close combat units like Totenkorp and Shrekwulfen do not automatically dominate this part of the game. Similarly, highly mobile flying units don’t get it all their own way as units can now deliver reaction fire and make other reaction type orders that keep generals at the table and making decisions all the time. All these rules interact in elegant and subtle ways that open up interesting new gaming possibilities.

Existing army books also work with the Konflikt rules. My friend Brad and I tried this out one evening at Games Laboratory. I took a Tiger, some SS vets in armour and a truck load of zombies. Brad took a Japanese list with no weird stuff. The game was compelling (albeit with some page flipping as we took in the new rules), and the Japanese won the day. Turns out medium howitzers can really mess up your day whether you start the day living or already dead! 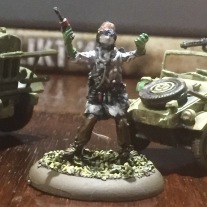 Mad doc – a fun unit but did nothing this time 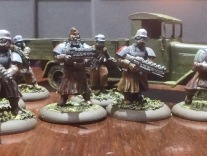 It was nice to be rolling some dice again, and I think Konflikt 47 is a fun addition to the Warlord Games universe.
D.

… there is only Christmas. 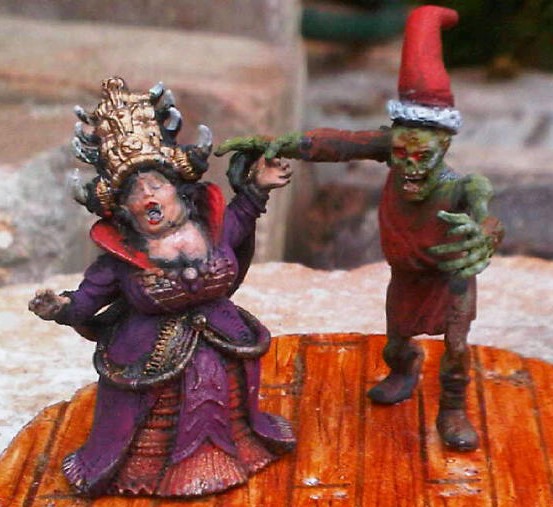 And, as they say in the classics: it ain’t over ’til the fat lady sings:

Lucky we have one handy.