I’m on another podcast!

Paint All The Minis is the brain child of Dan Adams, who each week has a chat with someone about gaming. This episode Dan and I speak about K-47, but with more than 100 shows recorded, if that’s not your thing there is sure to be one that is.

What other gaming related post casts are people listening to?

This last Sunday saw Operation Bear, the largest Bolt Action tournament held in Melbourne so far. Thirty players assembled at Good Games for a cracking day of gaming. The hook of the day was 1,111 points using a single reinforced platoon (and no theater selectors) extended to allow one additional 0-1 choice provided nothing was repeated. So, you couldn’t take two Panzer III, but you could, for example, take a Tiger I and a Wirblewind. A silly example, of course, because that is almost 600 points, more than half of your budget.

There is a theme to the list. After the fall of Monte Cassino and the breakout from ANZIO, the 508 Heavy Panzer Battalion was used in penny-packets in support of 10th Army as they retreated to new defensive positions north of Rome. My force contained Heer Grenadiers, a unit of Fallschirmjager and a Tiger I accompanied by its anti-air asset, a Wirblewind.

This is somewhat of fudge, since while Tigers were often defended by flak units, I don’t think Wirblewinds were deployed in Italy, or even available in June/July 1944. But I’ve got the model and I had never deployed it before. 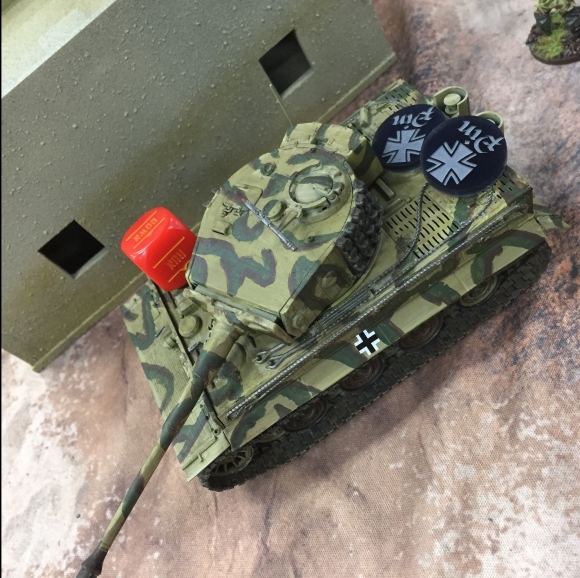 It was a fun day. There were three games, two with objectives and one for kill points.
I feel this mix is pretty much optimal for three-game tournaments and encourages a more balanced approach to list building (or at least discouraging single-trick lists).
By the luck of the draw I faced two other German Players (who I beat), and a Polish Airborne list (who carried the day). Three fun opponents, three good games, a generally good buzz and lots of beautiful armies to look at on the day. It is hard to ask for much more.

If you want to hear more about Operation Bear and things Bolt Action, I’m one of the guests on the Cast Dice Podcast discussing the day in more detail.

Not a lot of painting and just a bit of gaming in recent weeks.

However, I have now appeared in a podcast for the first time. Long-time friend Brad hosts LRDG II, a show about gaming in general and often Bolt Action in particular.

First half is a discussion about Games Workshop new one: Armageddon; I’m in the second half speaking with Leigh and Brad about a recent trial run for a Bolt Action tournament with a slight twist.