I have a growing hoard of daemonettes. The models have dynamic and threatening poses, and in numbers they bring some great close combat grunt. A large squad with a herald can gain re-rolling, rending wounds on the charge. While shooting can really mess up their day, if they can get in a charge, terminators and other marines will be quickly gutted and served up as victory kebabs.

The chainmail-bikinis can perhaps be forgiven since they have 5+ invulnerable saves. However, I do have reservations about collecting daemonettes. It doesn’t take long to see that in the Grim Dark future the patriarchy has not withered and died. It is more than the frequent lack of women in this fantasy sci-fi vision of the universe. The images that do make it through into the background and the artwork, and onto the table, are from a rather limited selection. It is like the designers of the 40K universe read the first couple of pages of the Damned Whores and God’s Police and rather missed the point. 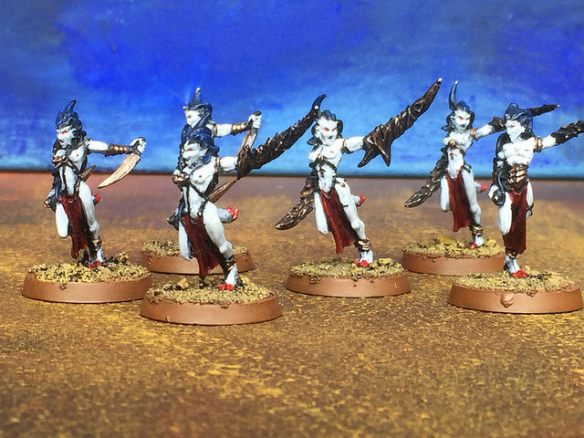 The Juan Diaz sculptures: still my favourites, even with the limited number of poses

And yet, here I am. Life is messy. Daemonettes often accompany my Word Bearers. Nothing says I’ve been reading Lorgar quite like zealots summoning daemons, and the combination of shooty marines and close combat daemons complement each other nicely. With my most regular opponent often fielding pskyer heavy Grey Knights it also feels right on theme. 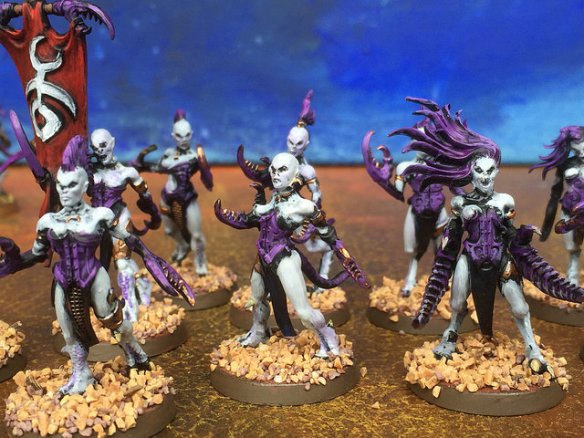 An experiment in practicing painting flesh

One from each squad

I have a recently acquired a lot of Nurgle plaguebearers. Add a Soulgrinder and greater daemon (or two)  and a troop heavy Nurgle-Slaanesh daemon hoard is looking like my next 40K army.

The most recent, and final, squad. For now.

And in the meantime, no slut-shaming my daemonettes or they’ll manifest on your home world and teach you the error of your ways.