So how much do you love gaming? I love it enough it enough to get out of bed early on the weekend to cross town to attend the biggest 40K event (in Melbourne, anyway).

Before this weekend I have had exactly one game of 8th edition 40K. Not a great apprenticeship I know, but I figured at 12 or pages of rules, well, how hard can it be?

Pretty hard, it turns out. I took a 5th ed war band to an 8th ed gun fight. While I had six fun games, I had my arse handed to me every which way but winning. My opponents were all great. There were some very cool armies on show too. There are a fair few pictures on Instagram using #arc40K if you want to check some out.

Here is day one. Imagine ugly detail of poor chaos deployment, ineffective shooting, failing to reach close combat and forgetting to use special rules and upgrades, and you get the general idea. 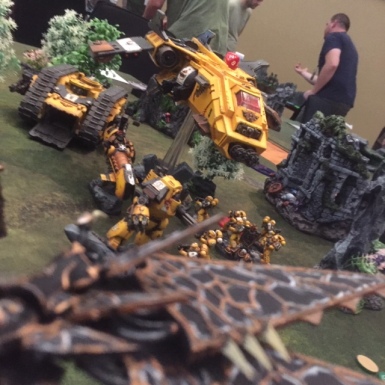 I did have fun, but one thing really bugged me about the current rules. Basic tactics just don’t seem to matter. Flanking is pointless, terrain doesn’t matter. And the command bubble type powers seemed to combine with big units to see every game end up as two, then one, big blob. Even so (and even while getting thrashed), I still laughed and shouted along with the rest of the participants. It was 40K after all, and it is nothing if not boisterous.

I’ve had my fill of the grim-dark for now.  I’m content to leave those that enjoy 40K to roll their buckets of dice. There is a game for everyone out there. Maybe we’ll play one together sometime soon.

7 thoughts on “So Arc happened”