The kickstarter went off and the game is now available retail and Andy and I finally sat down to a game of Plastic Soldier Company’s The Great War.
My initial impressions of the game were good and our first couple of games did not disappoint.

Andy had painted his Brits first and I did my Germans, so the board looked great. The photos not so much, given I was just wielding my phone under the kitchen light.

We played the second of two “training” scenarios. We skipped the first as we are both comfortable with the basic mechanics from playing Memoir ’44. The second mission represents a local assault by the British and introduces the opening bombardment mechanic.

Andy’s Brits get ready to go over the top

The format of the game won’t surprise anyone familiar with the Command and Colours series such as the popular (and cracking) Memoir ’44.  At first glance, Great War seems to have more bookkeeping, with HQ resource tokens and two separate command decks to wrangle. However, what become apparent very quickly is that this additional level of resource-management brings an engaging layer to the game as the troops themselves are not super mobile as they either defend their trench line or get ready for the mad charge across no-mans’ land. 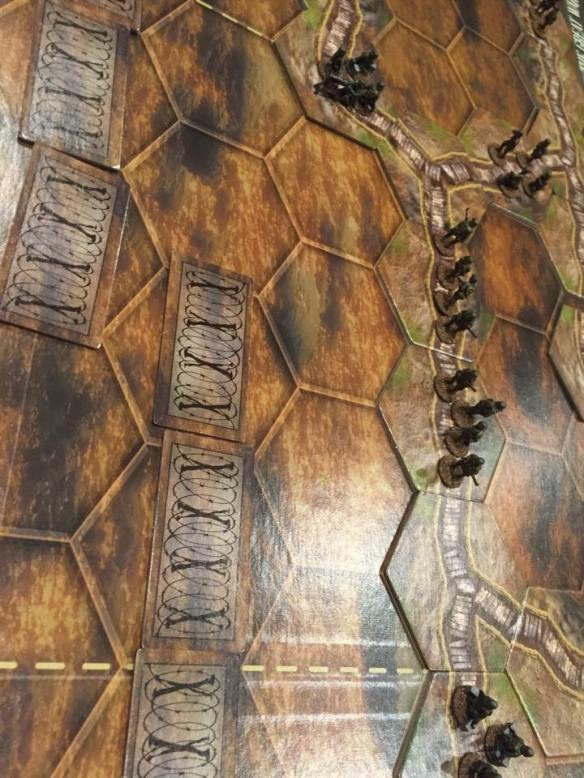 The key to winning is to play the cards in your hand in such a way that they provide force multipliers. It is a long, dangerous dash across the wire infested field between the trenches. Without playing your cards with cunning, combining them to boost a unit’s ability to attack or survive the inevitable counter-attack, you will find your attack stymied or defenders overwhelmed.

There are several features that seek, mostly with success, to bring the flavour of trench warfare.  Artillery, an off-board resource, can be really important, but just like the real thing outcomes can vary wildly from an ineffective spume of mud to sudden, brutal devastation. Machines guns are also really dangerous, but to win, eventually you need to have your infantry up close taking or holding ground.

We played twice, switching sides. I had the luck on the night, winning both times, initally defending as the Germans and then as the attacking British. Both were narrow victories and both were bloody-fought affairs.

Some generals may find this randomness frustrating, and it can be as your push on your left flank bogs downs from lack of suitable orders. It is this simulation of the friction of command (and the fog of war) where C&C games excel, and your flexibility as a general to exploit the luck of war that is the wellspring of fun playing The Great War.  The tension for both players is pretty constant and there is no opportunity to switch off during the other player’s turn, which I think is a big plus.

Andy and I will back for more.

Have you played The Great War or any of the other Command and Colours games?
I’d love to hear about your experiences.

2 thoughts on “Over the top”