As I flagged in my last post, I intend to support my Heer with some of the elite Fallschirmjager armed with SMG. Their role will be to either push forward and take objectives or hold back as threatening reserve depending on the mission.  I’ve taken advantage of one of the regular sales at Black Tree Designs to obtain the miniatures. I’ve grown to love their slightly odd-shaped heads: no poster boys here, these bruisers have trained hard and mean business.

I was initially a bit daunted by the camouflage, but I discovered that once the base coat was done the pattern itself doesn’t take all that long. 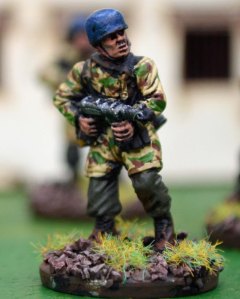 The camouflaged helmet will pick out the sergeant easily

I chose to make their helmets a brighter blue than they probably were so the squad will stand out on the table, easily identifiable as paratroopers, making them distinct from the regular grenadiers and other specialist units (like the snipers who are also in camouflage).

My helmet? I lost it in a card game, I found this one in the dugout

I wanted to include a panzerfaust as a sort of 5 point insurance policy. Once I started painting I realised that what I thought was a paratrooper is actually a Warlord Games SS trooper.  If you squint it just might be an unbuttoned jump-smock. 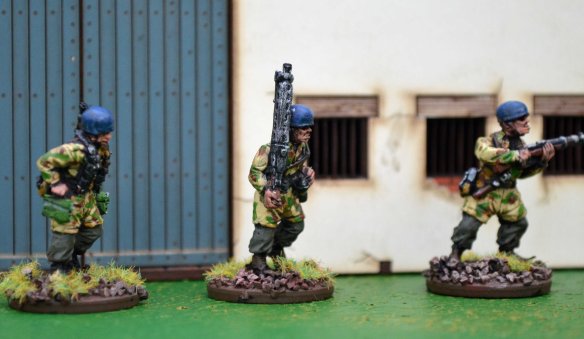 At 5 points using the Format Season 2 rules it is also hard to pass up a squad LMG.

See you on the battlefield
D.

3 thoughts on “Fallschirmjager Ready To Deploy”