The Republic of Northcote faced an incursion from James’ Grey Knights, who just to mix things up a little bit bought along an Imperial Knight.  Not just any IK, but Gerantius!

We played 1,500 points and used the tactical objective cards. So with 500 points on imperial knight, the Grey Knights took a venerable dreadnought, one of those monster dreadnought things and a couple of tooled up squads (including some paladins).

How to stop an Imperial Knight?  Well, my Word Bearers experimented with a couple of terminator filled land raiders.  I took a couple of squads of cultists (because it is always funny to see cultists dying horribly) and allied a slaneesh herald and some deamonettes.

Sharp eyes will spot two squads of daemons. The second were summoned by the herald

It was not a good day for the Imperium.  They just couldnt’ bring enough fire to bear, a disasterous deep strike saw the Lord and retinue sucked into the warp. Ouch!  This was, of course, the culmination of decades of subtle plotting by my Word Bearers.

How to stop 500 points of Imperial Knight?  Avoid the enemy deep striking into your deployment zone and then unleash 1,000 points of Land Raider-Terminator combo on the big boy.  Not cost effective but very satisfying. 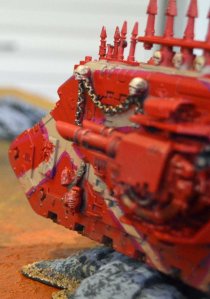 Final score 10 VP to 5 VP; imperial tacticians are already plotting the next likely move of the traitors. This is good, because it will give a chance for chaos spys to steal the plans and so avoid the need to develop any for themselves (leaving more time for partying at the temple).

4 thoughts on “How do you stop an Imperial Knight?”