Emperor be praised. The Exorcists have taken another step towards eradicating the foul presence of the Word Bearers that infect this corner of our Glorious Imperium.

Assisted by a detachment of Grey Knights, members of the Exorcists dealt a heavy blow to the traitor astartes, driving them from the field and taking possession of the strange relics found there.

The artefacts are now in the possession of the Inquisition, who deny all knowledge that anything was seized, that there were any Word Bearers here or that a battle even occurred.

Jim came over on Sunday for some Arc practice, 1,350 points of 40K goodness. We both used our Arc lists. Jim, his Exorcists with some Grey Knights and an Inquisitor; I used by Word Bearers.  We set up using dawn of war and played a variant of the relic where we placed three relics, one in the middle of each third of the table. The extra objectives were good, as it avoided the usual relic grid-lock in the middle of the table.

I conceded in turn six, given that in order to win 5 cultists had to rally and then take down his thunder hammer wielding chapter master to hold an objective to tie.  They didn’t rally.

The game was even for the first three turns.  Jim set-up rather spread out, which allowed me to hide from his somewhat diluted fire.  Highlight in the first half was my vindicator taking out a terminator squad in a text book pie plate spat! 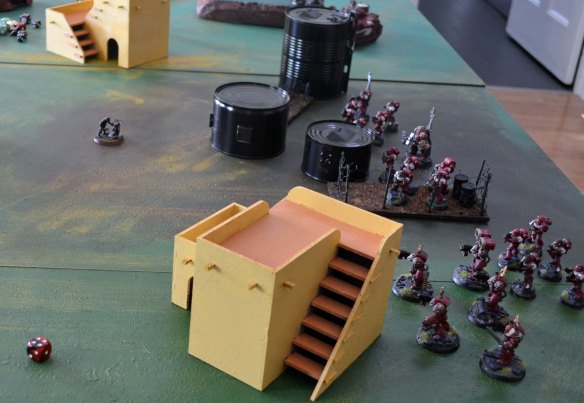 Things unravelled in the second half: the word bearer terminators had a deep strike mishap, ended up back in the warp and ultimately arrived too late to affect the game. Then, the Exorcist general tore through, mashed and made life generally unpleasant to daemonettes, chosen, marines and cultists. Not a bad day’s work and earning his second MVP award this season. Well done that man: 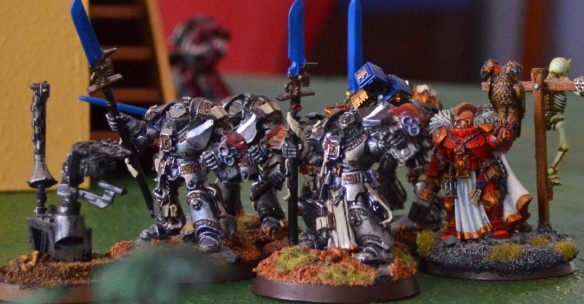 The Grey Knights: “Move along please, nothing to see here”

Too late to change the list for Arc, but I think the army will work OK anyway.
No AA, so air will punish me, but I figure I will meet on the second day the half like me without flyers and then start dishing out some damage of my own.