It looks like after an extended period of relative calm that war is returning to the east.  A massive build up of war material has occurred and battle appears to be near.

With four players we have decided to go just a little short of an Apocalypse battle, with two per side and a bit of a narrative using this mission I’ve cooked up (inspired by the battle missions book):

The mission is an assault on prepared positions. It will be bloody.

Set-up is on a double table, joined along a short edge, with two players per side and 1,750 or thereabouts per general (3,500 per side).

The tables are set up so there is a clear defenders’ side with bunkers, aegis, etc. along one long edge and the other with more limited cover (craters and similar, perhaps some ruins) that will be the start line for the attackers: 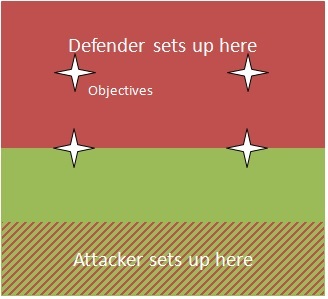 Sort out who will attack or defend – I propose that high roll will attack. This could be driven by narrative to allow more planning. I like the idea that company commander doesn’t always get to optimise their assets – you might elite, but the situation is such that you’re now stuck in a trench system waiting for the enemy. Deal with it.

Defenders deploy as many units as they want in their half of the table and gets the following special mission rules:  heavy metal, we ain’t leavin’.

Attackers deploy second. Their deployment zone is 12” deep on opposite long table edge.  The attackers get the following special rules:  fast recon, meat grinder, take that!

We ain’t leavin’ = the defender may fortify up to 200 points of terrain into fortifications (pg 114-6). This is in addition to any points that may have been allocated in the armies.  Specify this during  deployment

Meat grinder. The big push is on. There are plenty of reserves and the generals are not afraid to use them. Destroyed troops choices may come back as reserves. The complete unit returns except for any transports. They may enter from any table edge, short or long, on the attackers’ half.  Units that normally get deep strike or outflank or similar don’t get to use this mode of deployment if they arrive from reserves after being destroyed.

Take that! After deployment but before the initiative is rolled, the attacker gets to fire an artillery bombardment.
The bombardment is 1d6+3 S9 AP3 ordinance 1, barrage, large blast shots.

Winning the game: Each objective is worth 3 points for the controlling side at the end of the game. The winner is the side with the most VP at the end.

With four players we would normally make all four warlords subject to Slay the Warlord, but we have a plot running with some Eldar allies so it makes sense for us to just have one nominated target per side. More on that later, if it turns out to be interesting.

I’ll let you know how we go.